A crash course in computer Cache

Even though the computer run much faster then we expected nowadays, the speed between the different components are still very large. To solve this problem, we introduce different levels of caches. After access the data from storage, we store the most used (temporal locality) and the nearby data (spatial locality) in the current lever so we can aceesee them directly later. The term storage here is relative. For example, main memory is a storage to CPU cache, and the disk is a storage to main memory. When running a program, it may reach several levels of caches. Let’s look closer to it: 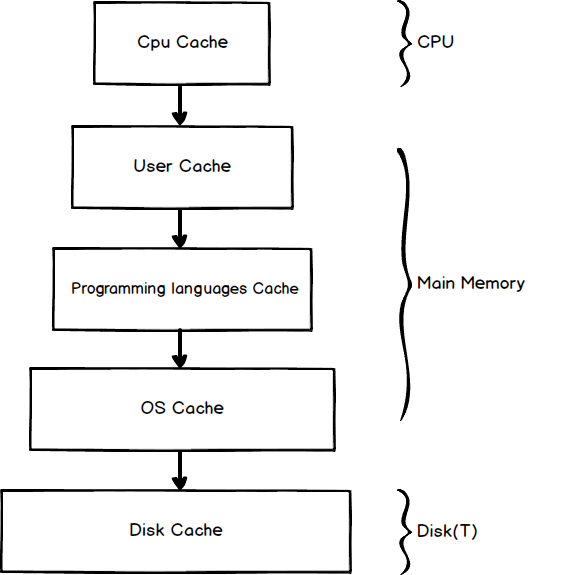 CPU built a pyramid-like cache architecture, each of them keeps a small piece of data and instructions in it. 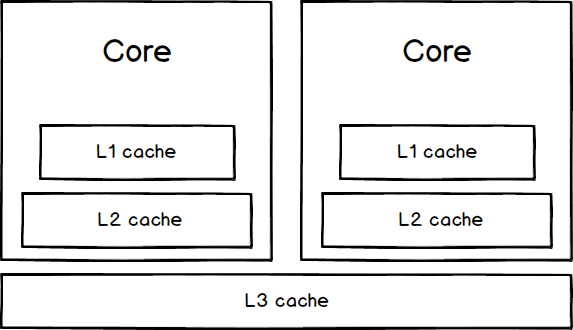 Every data or instruction form different kinds of applications may cache by the CPU cache which programmers can’t control. For more details, you may have a look at How L1 and L2 CPU Caches Work.

Generally speaking, User cache is the most used cache form programmers. When we use a hashmap or dictionary to store some data for future use. User cache comes to our eyes. Here is a Python example to use cache or not for calculating the nth Fibonacci numbers:

With the help of the User cache, the time complexity of this problem drop from O(2**n) to O(n) which save a huge of time when n is large.

Since calling system call like read() or write() repeatedly in user space is expensive, some program languages try to avoid this by keeping a small piece of cache inside. The I/O module in Python use a small buffer (8 1024 bytes by default) to store some temporary data. When we try to read some data from f* using:

Python will search the data from its read buffer to see if the data already in it before calling a raw system call read(), we will show more details in the later capter.

Disk I/O may be the slowest part of our computer. Therefore, after access the data from the disk, the OS system will keep the hotspot data (Which its size is dynamic) in main memory (In Linux, it called Page cache). Moreover, we can use a mechanism called virtual memory to swap this data to disk temporary if not enough main memory is available now.

Linux supports virtual memory, that is, using a disk as an extension of RAM so that the effective size of usable memory grows correspondingly. The kernel will write the contents of a currently unused block of memory to the hard disk so that the memory can be used for another purpose. When the original contents are needed again, they are read back into memory

Disk also has its own way to speed up. Even though we use fsync() in our code, it doesn’t mean the data already written to the disk safely.

Calling fsync() does not necessarily ensure that the entry in the
directory containing the file has also reached disk. For that an
explicit fsync() on a file descriptor for the directory is also
needed.

The data search policy in cache is quite straightforward. We search the data from the top to the bottom. Let’s dive into the deep to see how a computer actually looks up the data in the cache. There is three popular way to do this nowadays. Set Associative, Fully Associative and Direct Mapped. Luckily, the last two just a special case of Set Associative (Direct Mapped ≈ 1-way set Associative, Fully Associative ≈ N-way set associative). Here is a small 256 bytes cache which divides by four lines, every line contains 64 bytes (We call it 2-way 2 set associative because we have 2 sets and each set contains 2 lines in the cache).

We used a 2-way 2 sets associative in this example, Can we do better than it? Well, first let’s imagine, if we only use one set for the cache.

we have to compare the tag number in each line from the top to bottom which would be slow in large cache. This is how Fully Associative works. Second, it looks like the search would be faster with more and more set. How about we create n set which n equals to the number of lines.

When we found the data in the cache, we call it cache hit, otherwise cache miss. The computer also has to decide what should do after a cache miss.